With every F5 key press I get a new Pausing window when a squence is runnning. Can we get a different shortcut for pausing and for starting a sequence. 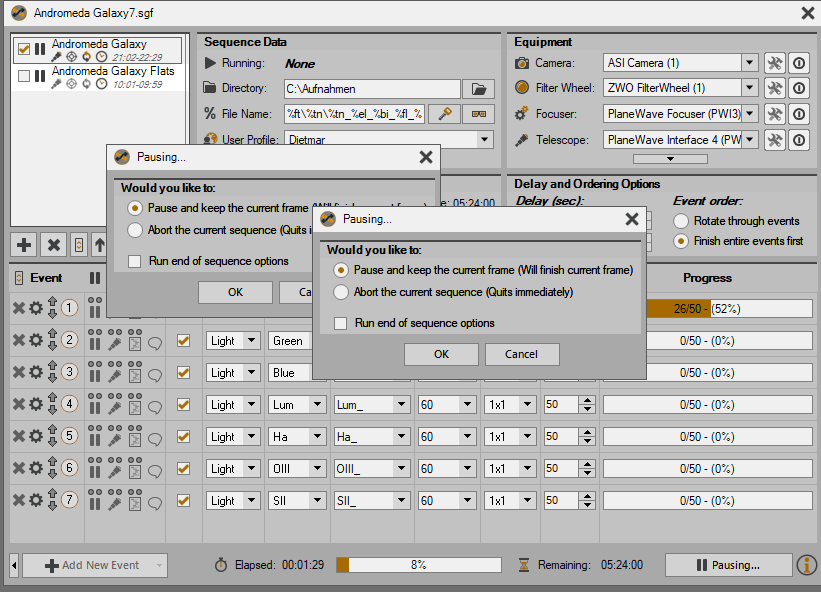 What is the issue with F5?

I see, it sounded like you were wanting a different key other than F5 to accomplish this. But rather the current behavior of the F5 key needs to change.

Actually it is both.

The current behavior of F5 should change to not open x windows on top of each other.
A differnet shortcut to pause and abort a sequence would be welcome.
Dietmar

Those shortcuts are primarily made to be useful by an actual human and not really for automation. I’ve addressed the multiple dialogs but keeping it to a single shortcut for now. The real solution for the automation would be to add the ability to start/stop via our API.

It would be great if you could add a start/stop command to the API list. This has been asked many times in the past. If you could also add a command for “Connect all devices”, then one can start SGP from an external program. In the past I have used automated shortcut keys for this purpose (i.e. SendKeys commands), maybe Dietmar does the same, but I found it very unreliable.

That is really sad to hear. At the very minimum you should also fix the “connect all” command to not crash other manufacturers drivers. This also happens if a human is executing this command.
The real solution would be nice but will never happen.
Dietmar

At the very minimum you should also fix the “connect all” command to not crash other manufacturers drivers.

Yes, that was addressed as well. But I didn’t mention it here as that is a different ticket:

It would be nice if SGP could check if the equipment is already connected before it tries to connect with the “Connect all equipment” Ctrl-Shft-C command. The scopedome driver is crashing if SGP tries to connect a second time. Thanks, Dietmar