Unnecessary Meridian Flip-how do I prevent this?

Hello everyone, my sincerest apologies if this has been answered here but I can’t find it so here goes.

I was trying to image a couple galaxies that were somewhat (but not a lot) East of the Meridian. I had found them manually using the RA/Dec coordinates and they were IN my camera frame but not anywhere near center.
Since I had the exact coordinates typed into my target and I had just done a plate solve I figured I could say “center object” and it would nudge the mount and take the appropriate plate solves and get this nice and tight.

But NOOOOOOOOOOOO, it decides that it has to twist around 359.9 degrees, wrapping up the cables around the mount and putting me into a situation where I was going to need to do a meridian flip for real in about an hour instead of being all set and ready to go for 3-4 hours like I had it.

As far as I can tell I had the “automatic meridian flip” checkbox unchecked when I went back and looked at the status of the sequence afterwards.

I was using my SkyWatcherEQ6R-Pro mount for this running under EQ-MOD via ASCOM.

I need some ideas as to why SGP would decide to do this when all it had to do was nudge the scope a couple arcminutes.

I also need to know how to prevent this from happening again with absolute certainty.

This year I’m putting up an observatory in a rural location with the idea that at some point it could be remotely operated and this kind of unplanned stuff just CANNOT happen. There’s too much other stuff to learn and manage like dome rotation sync and all that to be worried about mount freakouts like this.

Bill, a GoTo calculation will always have two possible solutions, one where the counter weights are above and one where they are below the horizontal. The calculation method, I believe, will always choose the safe position with weights down, so even if you are just a minute past the meridian, a GoTo move will end up doing a flip. A more sophisticated solution would be to look at where the scope is pointing and choose the solution that is closest, as long as it is also within the meridian flip limits that have been set. It wouldn’t be too hard to program that kind of calculation, but I don’t believe that the facility exists in SGPro (at least I’ve never found it, and I have looked for the same reason as you), so it would have to be a feature request. I don’t think it would cause any problems with dome positioning / synchronisation as SGPro handles tracking past the meridian just fine already.

Mind you, if you are going for a remote location, you’d need pretty good cable management, etc., so meridian flips shouldn’t present any issues. My dome is just in the back garden, and I set things running and go to bed! The only time I’ve had a problem is if I’ve had a cable snag (I try, but my cable management isn’t the best

), or on one occasion, the dome drive was slipping and so I ended up with some nice photos of the inside of my dome!
Terry

Bill, you might want to check your settings in EQMOD since it’s the one that’s actually doing the movement. Also, take a look at Rob Morgan’s Green Swamp Server (GSS - an EQMOD replacement) to see if you get the same results.

Ernie,
That’s great advice; I never would have thought to look there. I was thinking that SGPro would be in control but from what you’re saying SGPro just says to EQMOD, “Here’s where we’re going, you got it from here”, and EQMOD takes over and decides how it wants to get there (no matter how stupid).

I’ve poked around in EQMOD a fair amount but I don’t truly understand all of it; do you have any hints about the kind of things I’d be looking for?
I figured out to set travel limits and I’m sure EQMOD checks to avoid those before deciding on a route but is there something else in there I’m missing?

Thanks for your reply…

Terry,
Yeah, you’d think that a “smallest slew is best” checkbox could easily be there and as long as mount limits are not violated it would be up to me to decide if I’ve got my weights higher than the scope for an hour.

Cable Management
You know you hear that “cable management” is important but I don’t see a lot about a sure fire way to accomplish it and I don’t remember seeing a list of do’s and don’ts anywhere.
I have 2 cables coming off the scope right now, a power cable for the PrimaLuce and an Ethernet cable for communication/control. I know I can do that via WiFi but for now it’s Cat6.
I always try and get my cables to come off the mount as close to center as possible figuring it would have the least ‘tug’ on the scope that way. Since they have to be able to move with the scope that means there has to be freedom and play to it but there are an awful lot of snag points in all the various knobs for the saddle, Alt & Az adjustment knobs and the two AZ lock screws, Gemini2, the big knobs on the base of the legs (these will go away when I’m on the pier in the Observatory), spring loaded worm gear bolts etc.
So what can one do to make this bullet proof, cover all the knobs with some kind of rounded plastic cover? Velcro tie the cables into a tight bundle?

Any suggestions or link to a good resource would be appreciated!

I’ve been a user of EQMOD (now use GSS), but not a “power user”. I recommend you join the Groups.io EQMOD forum and post your problem there.

I’ll definitely check that out.

If I’m not mistaken, I think what you want to do is possible by activating “Force Flipped GoTo” in EQMOD. 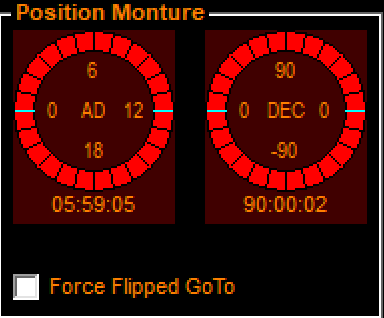 Or this video tutorial by the EQMOD dev (what I think you want to do is shown about 2:30 into the video): 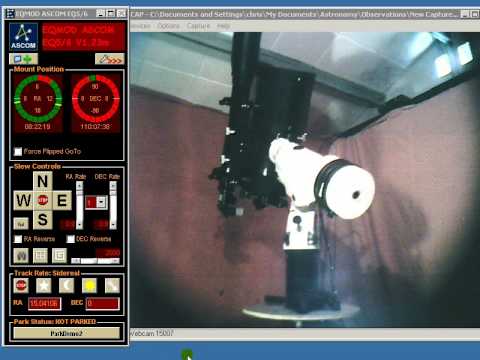