I was wondering if there was anywhere a database of folks different equipment and what step sizes they ended up with for autofocusing?

I now have a bigger 2000mm focal length Ritchey Chriten and haven’t really been able to dial in the autofocus. A good starting point would be appreciated?

Thanks, I had tried bigger steps and seemed to be making some progress but that’s when it clouded over and its been 4 days since…

Hrm this is interesting.

No matter what step size I set or number of steps, I always get less points on the right side than the left. 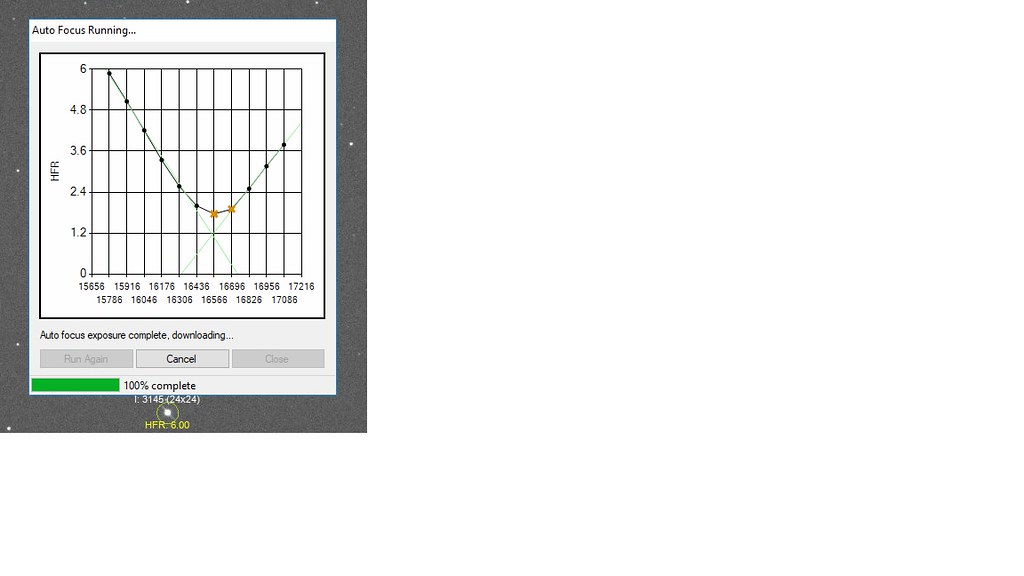 Is this a backlash thing or not worth worrying about?

The HFR results are not all that great.

I think this is very good. I get similar AF graph as yours many times. If the images look well focused, then you are done.

Still trying different step sizes with my Lakeside as at present the graphs are more like saw teeth than a ‘V’ curve.

It’s almost impossible to provide any useful information about step size because it varies so much depending on the focuser, the scope, any additional optics and so on.

The simplest way may be to get the image focused manually then make a series of moves, taking an image and determining the HFR for each position. Look at the images to see that what you get makes sense. Go as far as you can, then move back to the same focus positions and determine the HFR at each position again. The values should be similar and critically the best focus position should be the same if its approached from a higher or lower step number. If you find that you don’t get a consistent best focus step position then this needs fixing, maybe adjusting backlash or removing any source of slippage.

From this you should be able to choose a step size that has two or three points around the best focus and a smooth change in HFD for the others.

Once you have done it there’s no need to do it again unless you change your set up.

If your autofocus curves end up with the minimum offset from the center - that is a problem and likely due to inadequate backlash compensation. It could also mean something is slipping.

It is perfectly normal for the first autofocus curve to be offset from the center. But if you find focus once and then take the curve again - it should be very well centered. If it isn’t - it means that after focus you will end up slightly out of focus - and that is bad.

So - I would look into increasing the backlash compensation - and make sure the autofocus curve is taken in a good direction that pushes against gravity.

Thank you for the input everyone. I found that there were some ‘unknown’ mechanical issues with the focuser.

I did a simple disassembly cleaned up some items and ‘tuned’ the focuser and re-assembled it and last nights results were much better and more importantly more consistent. I am not currently using any backlash compensation.

The V curves looked pretty good at 300 steps with 4 on one side then two at ‘prime’ then a few on the left side but the bottom or low point was fairly well centered. The Hfr at the first point after run out (or is it in?) is around 8.0. Is there a number there that one should strive for? 3x average prime? 5x?

But the Hfr’s are not as small compared to what I am used to with 2.0 to 2.4 around average. I was getting 1.2 with my newt. I am thinking this may actually be acceptable seeing as my as/pixel is pretty small at around .6 as/pixel with the longer focal length (2,000mm) with the RC. Is this a valid assumption?

When considering backlash compensation, how does one determine which direction to begin with and then the step size?

Again thanks for the help so far!