Then SGPro stayed idle for about 3 hours, then out of nowhere the image was saved at 5.26am. I don’t know if that’s an issue with SGPro or ZWO, I’ll link the log below.

Also the fact that the sequence eventually recovered might be useful to design a way to recover faster for this kind of issue. 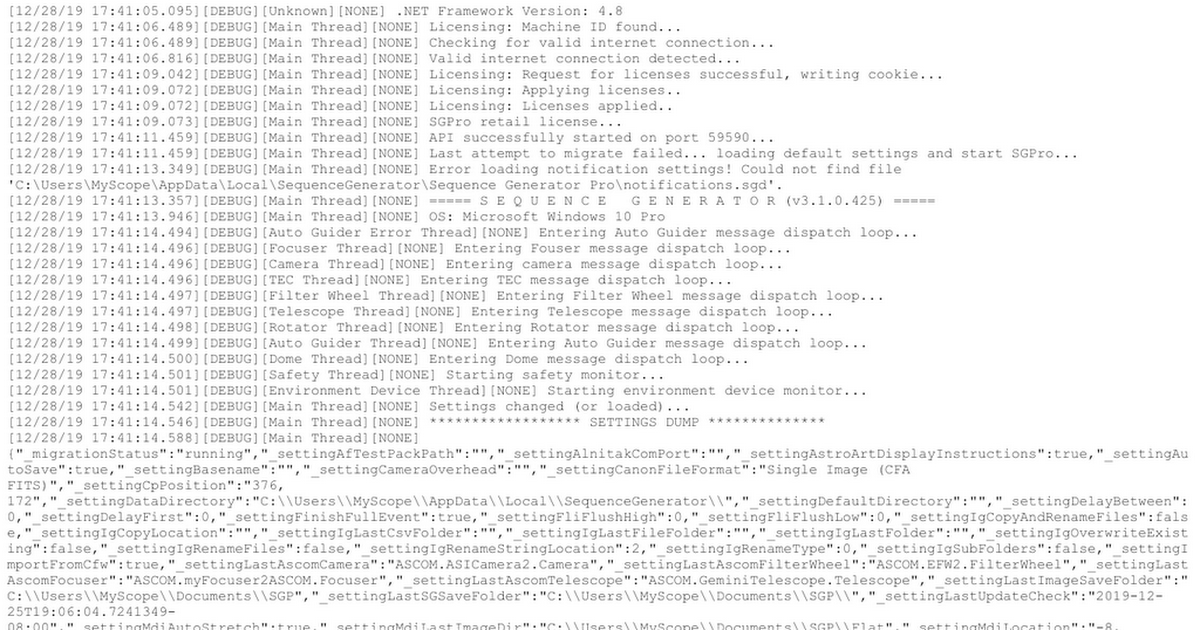 We are no longer supporting ZWO drivers natively. I am unsure if the problem stems from our attempt at native support, but we are not currently able to investigate issues from ZWO cameras that don’t come from use of the ASCOM driver.

Thanks, I’ll switch to the ascom driver and see if the issue happens again.

I think it was because ZWO has transitioned to trained hamsters carrying individual bits by clicking on a switch.

The following PHD2 errors are because the mount hit the limit.

Yes, it sure does look like SGPro sat and waited for a long while to turn driver temp comp off. I know you were not using driver based temp comp, but it seems as though your focuser driver may hate it when it is asked to turn temp comp off and does not have it on. This is seemingly a bug in the focuser driver… in the meantime, it’s easy enough to skip this command if your focuser reports it wasn’t on in the first place. This will be in 3.1.0.431. Honestly though, I don’t know if this will make any difference to you because it seems to get stuck on the check to see if the driver has temp comp available and not on the command to turn it on or off. You may need to enable focuser logs if this doesn’t help.

Thanks for the feedback. I’ll have the focuser trace on next time.

Any clue on what is going on?
Thanks

I can’t really say, but I expect it is the same thing as last time in that the focuser is just not responding when asking for information. The very next thing the code does after that note about the DATE-LOC is ask the focuser for its current temperature. We never seem to get past this… Focuser logs would help unwind this.

Hey,
I was able to recover the focuser log for that last session, see around these two times stamps (22:51 and 1:43), something is clearly happening with the focuser. Is the issue with SGP or with the focuser, or maybe windows COM port?

We are not qualified to accurately determine exactly what is going on in the focuser driver, but it appears to be in what is called a “deadlock”. This log would be very helpful to the driver’s author.

Pages for logged out editors learn more In concurrent computing, deadlock is any situation in which no member of some group of entities can proceed because each waits for another member, including itself, to take action, such as sending a message or, more commonly, releasing a lock. Deadlocks are a common problem in multiprocessing systems, parallel computing, and distributed systems, because in these contexts systems often use software or hardware locks to arbitrate shared resources ...

No issues with communication… all that seems stable