We typically don’t formalize docs until just before release, but some things need a rough draft to go out alongside the beta. This applies to the SGPro 4.2 beta which, as of this writing, it not yet available, but early feedback is welcome. In all honesty, this process helps me to ensure that all of the use cases are well thought through. You are welcome to skip down to the actual “docs” part if you’re not interested in the sausage factory.

A fairly popular request over the years has been to support an auto focus trigger based on the quality of light frames during the sequence. In other words, track your light frame HFR and when it increases by some amount trigger focus.

There is complexity hidden in this request that has prevented us from implementing it in the past. Nothing we can’t overcome, but we felt (and still do to some degree) that other triggers provided negated the need for this trigger so we didn’t add it. Our users continually swear that existing triggers are not sufficient because they are not reliable enough for their rig. We don’t claim to know it all and if enough folks tell us something is true, we’ll certainly listen.

Here are the problems we are attempting to solve in order to release this feature:

Here is the new trigger… 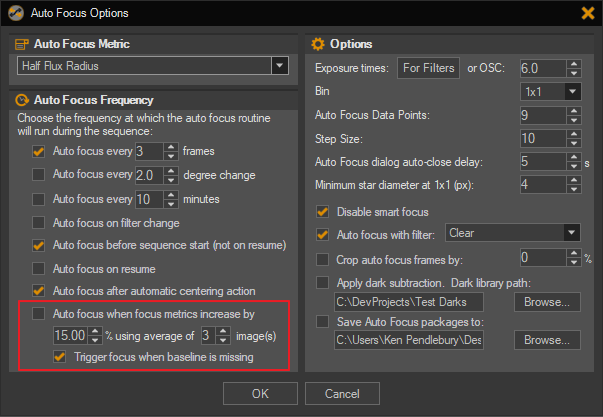 Checking this box will cause the sequence to run auto focus when an average deviation from focus is higher than some percentage (that you define). In the example above we would focus when the average of the last 3 metrics increases by at least 15%. The calculation used for interpreting deviation is a simple average using the number of images specified for both HFR and number of stars. Both metrics must meet the deviation threshold to activate the trigger. The trigger will never activate until the sequence has the required number of frames to perform the calculation. In the example above, there is no possibility that the auto focus will trigger until just after the 3rd frame.

The checkbox located below this trigger that reads “Trigger focus when baseline is missing” defines a behavior of this trigger when moving from one Sequence Event to another. Consider 2 consecutive events where Auto Focus is run at the end of the first event and the current baseline metrics are specific to the first event. Upon starting the second event, there is currently no valid baseline to use for comparison (because the last baseline we captured is not compatible). If this box is checked, the lack of a baseline will automatically trigger focus (and produce a baseline after the first image in the second event). If the box is not checked, the new baseline will be collected only when a different trigger cause auto focus to run.

The current baseline for the current event is displayed in the Auto Focus module and in the Control Panel Focus Tab with text like 1.5 (654) where the first number is HFR and the second is number of stars.

Lastly, this isn’t specific to the new trigger, but it is related in that we now collect this information and, in some cases, it might be helpful to display it. Since events now have their own histories and individual baseline markers, you can now see them in event options. 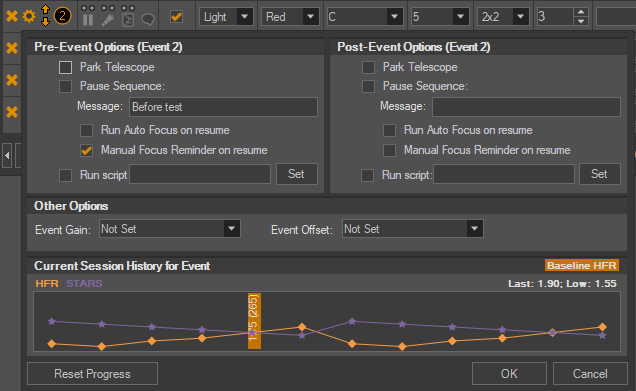 The current event’s baseline can be reset (or invalidated) in the following situations:

Is there something that can be leveraged from PHD2? Changes in guiding performance would be great feedback in deciding if the increasing focus metrics are environmental or focus related.

If someone is imaging with a OSC camera then the issue of a filter change triggering an AF is not an issue but for monochrome cameras, it is likely every filter change will trigger an AF. I personally use filter offsets to avoid an AF on filter change. This is very useful when shooting filters in round robin mode.

Perhaps the biggest challenge is how to avoid all the “false positives” that trigger an AF that does not result in any improvement but consumes valuable time. We need to also be careful that we aren’t pursuing “robotic” imaging rather than just automated imagining. Robotic imaging is a bottomless pit of options.

It can also be a challenge to ask software to make up for poor equipment. If someone is not using a high quality focuser with built-in temperature compensation, then acquiring one will be the best solution to maintaining good focus during an imaging run.