Solve and Sync in Simulation Mode

Can anyone else confirm that SGP cannot Solv and Sync when in simulation mode? In my case it doesn’t because rather than using the image I have opened it opens a “preview” which is solid black, implying that in non-simulation mode it would have perhaps taken a picture for solving and syncing.

Are you meaning when you’re using the ASCOM Simulator Camera and Telescope?

If so then “yes” solve and sync will likely fail with that combination unless you’ve loaded the simulator with an image that corresponds with where the scope is pointing and have also setup the pixel scale accordingly.

How do you load that image? Even if you have loaded an image first the pressing of solve and sync will cause anther window to get open and that window has a blank image in it which SGP seems to try and use fo plate solving.

The ASCOM camera simulator is not designed to be used for solve and sync. It loads a fixed image from a file and while this can be changed to a different one in the simulator setup it isn’t intended to be changed on the fly. Getting a simulator that can read the telescope position and load an image based on that position is tricky. I tried but it failed too frequently to be reliable.

It is good to know that the ASCOM camera simulator is not designed for Solve and Sync. Perhaps you might consider deactivating those two keys if a user has selected such a camera although I am not able to understand why it should be that way.

A better thing would be to “allow” it. After all what is simulation for? In my case it would be very helpful to know what works and how in order for me to plan. It would help to see if sync actually happens and, in simulation, I can slew my scope to a particular target.

In addition, I strongly suggest placing an obvious button for the Blind Solve and for solve using a solver right inside the user plate solving tab interface. At the moment, a right click on the opened image is the only way to find the feature and that appears to be an undocumented feature only a lucky few may be aware of.

In any case, thanks for freeing me from perpetual search for how to solve and sync using a simulator.

A better thing would be to “allow” it.

Technically we do allow it and if you provide the simulator with a valid image and have your setting correct within SGP it will work. But it’s not really great for attempting to simulate a sequence unless you want to swap out images.

If you want true simulation you can also do that. Please keep in mind that this route is generally unsupported. See this post. You’ll need to have a licensed version of Pinpoint. 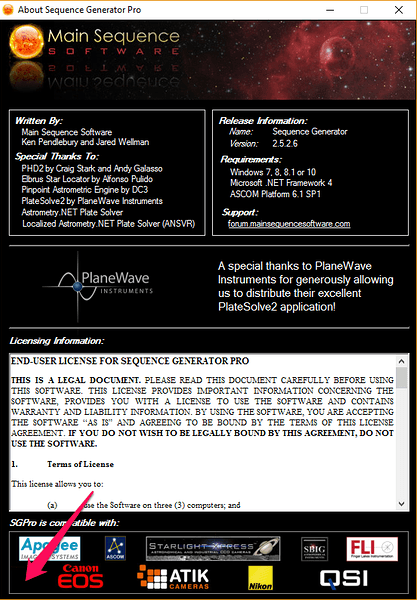 @Reimer22 If you decide to go with a simulation, we can help a bit (this assumes usage of Pinpoint). Open the about box and click the secret button (where the red arrow is pointing): Then, after that, open this sequence: ...

In addition, I strongly suggest placing an obvious button for the Blind Solve and for solve using a solver right inside the user plate solving tab interface.

Unless I’m missing something, isn’t this the button you’re asking for? 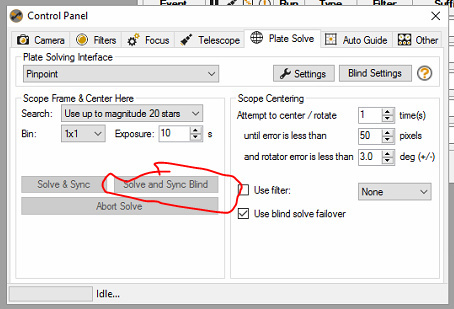 also available in the Centering Module:

As I said before it could be that my ideas of simulation and yours are different. I don’t know why anyone would want to simulate the entire imaging session, incorporating all the features of SGP, but I have to agree that someone might and that might be useful. To me, simulation is about how things might work. I do have a valid image and I can plate solve [ANSVR only] by right clicking on the opened image and selecting plate solve while those two buttons are deactivated because I have not connected a camera. Once a simlation camera is selected the two buttons become activated, and the buttons do two things: solve and sync. Currently the only way to test plate solving is by right clicking on the open image.

I will try the “secret” method you mentioned and will get back with you.

I guess I’m not sure what you’re attempting to accomplish. If you want to solve and sync from a “Camera” image then you’ll need to setup the ASCOM simulator to use that Image as an input. Then when you take an image with SGP it will display that image from the sim camera. You can setup the V2 Simulator to take an image as input: “Solve and Sync” only operates on images off of the camera. It wouldn’t make much sense to sync to an arbitrary image.

If you’re just attempting to make sure that your plate solver is working then right clicking on the image and solving it is the way to do that.

I wanted to simulate an event with a focus on plate solving and I wanted to know what sync actually did. I wanted to do that indoors. So for regular plate solving, I can open an image and right click on it and have it solved using the ANSVR local solver. It would help me to understand what sync did in addition to just solve. I read the help file and I think sync will “…sync it to the solved location”. I wanted to know if that means SGP will update the RA and DEC reported by EQMOD or will keep the location to itself.

What you are pointing me here will definitely help out. Thanks again.

That ASCOM Camera Simulator is not part of SGP, I am sure. Is it something I search for and download?

I got the ASCOM simulator.

I believe it comes with the ASCOM platform. But it’s been so long since I’ve set it up I can’t recall. I can’t seem to find the V2 Camera Simulator elsewhere.

Yes, the camera simulator comes with the platform.

It turns out that even if the ascom simulator v2 is used and an image file is chosen, that upon solve and sync, SGP just loads a blank image (black) anyway and tries to solve that one, which of course cannot be solved.