Just a quick update on new stuff coming for SGPro. The 4.3 release is starting is pretty close to beta, but there is more to do yet. We’re working as quickly as we can to get it out…

A note: These types of posts are purposely made in an area where anyone can reply. We absolutely encourage this and welcome thoughts and feedback. That said, sometimes the “coming soon” posts trigger thoughts like, “that’s nice, but what about [this thing that I want]?”. That’s great and we want to know what that thing is… but if you post it here it will get lost or be forgotten. Stated simply:

Please post things related to these new changes here and for unrelated things, post them in the #sequence-generator:feature-requests topic. Thanks!

A long requested feature and more. Complete automation of flats as part of a sequence… handles both flat boxes and sky flats. A very detailed write up (documentation) is here: Introducing AutoFlats (coming soon in the 4.3 beta)

This release will come in 2 parts:

For the first part of custom horizons in 4.3, here is a quick video so you can see the editor, target overlay and warning system in action (make sure to click the gear icon and bump up the resolution of the vide so you can read the text): 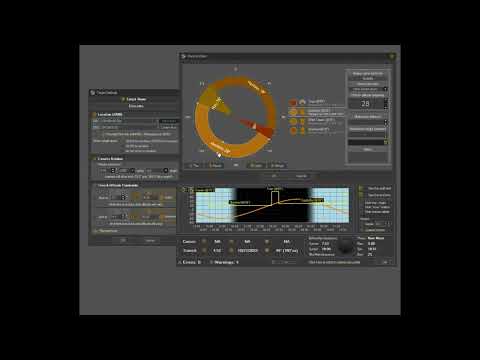 Custom Horizons is a reasonably popular request and 4.3 will make major strides toward delivering it. We have, in the past, been dragging our heels on this… mostly because we wanted to do it right and not present to slapdash text field that provides a confusing an non-intuitive interface. Moving forward, horizons in SGPro will have a major impact on how targets are captured and providing a clear interface that lets you know up front exactly what you can expect from them is important. Here is a …

New Feature: Support for Below the Pole Meridan Flips!

Long overdue and a welcome addition for those living closer to a pole, SGPro will now perform meridian flips when the target crosses below the pole (and will even execute multiple flips per session if you live through 40 days of night).

In an ideal world, everything would be perfect and sequence progress, as indicated in SGPro, would always be in sync with the images stored on disk. In reality, AP can be messy sometimes and maybe you needed to reset progress, or did it accidentally, or maybe one of a dozen other things happened that caused them to diverge. Now, unless you modify the number captured for each event, you will start to see images saved with file names very similar to existing one, but with a suffix like _1, _2, etc. Using this feature will automatically inspect the disk and update the sequence to match. You’ll also be able to indicate that you’d like the the new progress sync to run automatically whenever a sequence is started.

I forgot to add one thing. Not that folks have been clamoring for it, but the addition of AutoFlats has forced us to support slewing for Alt/Az so we thought that we might as well expose this stuff since it would require very little effort. In 4.3, we have exposed manual mount slewing in the control panel. If you need to use this a lot, something is wrong, but for occasional one-off use, it can be handy. Outside of a sequence, you can now:

Excellent additions! Just a note of thanks for continuing to push the boundaries of what SGP can do, and adding really useful features.

Agree, looking forward to the 4.3 Beta.

Well done and thanks for the continued updates, fixes, and additions!

I’m really looking forward to the AutoFlats. It looks like you guys have done a great job with a complex issue. I feel a little guilty asking for a change/addition before it actually comes out. I need to use dark flats. would it be possible to produce, for each AutoFlat, a second copy but using the dark filter and thus producing a dark flat? This would give us dark flat users a totally automated process. Thanks

I feel a little guilty asking for a change/addition before it actually comes out.

You shouldn’t… it’s really the main reason we promote these new features early.

would it be possible to produce, for each AutoFlat, a second copy but using the dark filter and thus producing a dark flat?

Possibly. That said we will almost certainly address this need in some manner. But, alas, the complexity of AutoFlats creates a situation for us where we really needs to get some miles on it and allow it to stabilize before we add things like this.

Thanks Ken. With Skyflats, can you choose both dusk and dawn flats. This way, if for some reason the dusk flats fail or are incomplete, you can get the dawn flats. Or would this happen automatically if you just chose dusk flats.

can you choose both dusk and dawn flats

You can for sure. In this case, once you have gone through the setup process, the only thing left to do is enable (or disable) flats for before and after the sequence is finished. If both are enabled, AutoFlats will capture at dusk, and, if it was not able to finish, do so at dawn. Note the “after sequence” AutoFlats runs will run for almost all sequence termination types, but, it should be noted, that some types of sequence failures will not run AutoFlats after the sequence terminates.

This is the AutoFlats setup dialog for “in-sequence” runs. All values here also belong to the equipment profile so they can be used in future sequences. 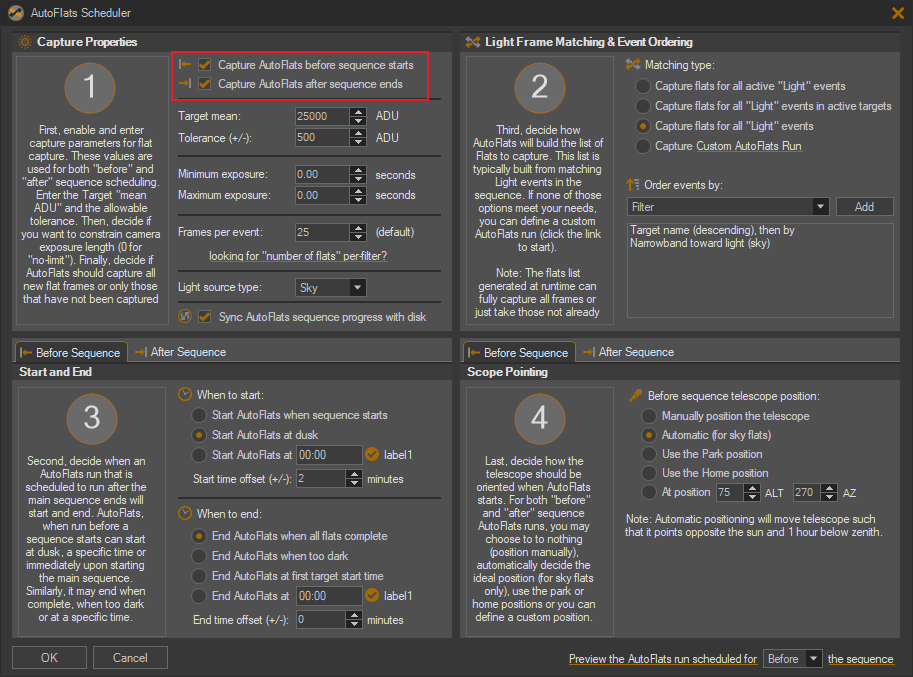 Many thanks for introducing the below pole flip. SGPro failed to command North facing Meridian flip - #13 by Dave